Ready to escape the city and embark on a nature-filled journey. Photo courtesy of Jessie Festa.

Actually, let me rephrase that.

I pay for a car; however, because in the one month I kept it here I racked up $400 in red light camera and parking tickets I decided to store it at my parent’s house on nearby Long Island.

Recently they came to visit for the day and I asked them to leave it for me so I could use it for a few weeks and do some day trips.

My first: a solo female road trip to Bear Mountain for some hiking! 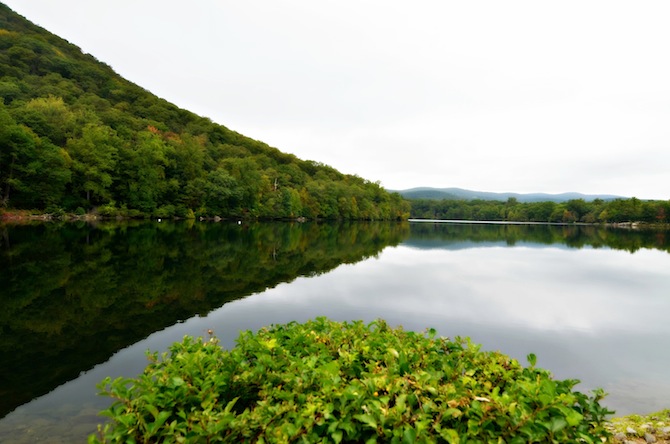 After parking ($8 per car) I went up to the Auxiliary Building to grab a trail map, which, to be honest, was pretty confusing — I would suggest purchasing a Harriman and Bear Mountain State Parks Trails Illustrated Map or Harriman-Bear Mountain Trails Guide if you’re really serious about doing the best trail possible.

Let me preface this by saying the night before heading to Bear Mountain — traveling solo — I (stupidly) watched the movie Zodiac.

If you have not seen it (spoiler alert!) there is a scene where a couple is having a lakeside park picnic that ends in a very painful and gory massacre by a deranged killer who has been watching them.

Also, this movie is based on a true story…meaning the entire drive up I was wondering if I would even have the guts to get of my car in the wilderness where anyone (like the Zodiac killer — who is actually dead) could be watching me.

I’m also someone who jumps every time the phone rings and can’t look in a mirror once sun sets as I’m afraid of seeing Bloody Mary in my reflection.

Obviously I should not be watching scary movies.

There are lots of stairs to climb with this hike, although I didn’t find any to be too too steep. Photo courtesy of Jessie Festa.

My main objective — before poisoning my mind with horror movies — was to find a secluded trail to find inner peace and clear my head, as I’ve had a lot of stress in my life lately.

I stared at the map I procured from the park, trying to find a challenging trail not many people would traverse, but unfortunately had a lot of trouble finding the starting point. So, I wandered.

There were so many scenic and quiet trails around the mountain with absolutely nobody on them.

And I did go up a few of them for a bit.

Ultimately, however, I decided to complete one that at least had a few people on it so that a) I would be safe from serial killers and b) someone would be able to help me if I got hurt on the trail.

I ultimately chose the Perkins Memorial Tower Trail because it promised a historic museum and the chance to summit Bear Mountain.

In my opinion, this is one of the best hiking trails in Upstate NY and a true highlight of Hudson Valley tourism.

For it, I followed the white blazes to traverse along part of the famous Appalachian Trail, as six miles (10 kilometers) of it are in the park. There were quite a bit of stone steps along the way and a lot of uphill climbing, although there wasn’t any point where I felt breathless (I did work up quite a sweat, though!).

A few lookout points offered a scenic break and the chance to stop for lunch, and the trail was very straightforward and clearly marked.

What I liked about this trail was that, as someone hiking on their own, I was never far from another hiker. If anything happened to me on this trail, there was a 0% chance that nobody would hear me scream.

That was a very soothing thought. At the same time, this was also what I didn’t like about the trail.

For example, on the way down I had two children battling with each other with wooden sticks and screaming as they pretended to joust.

I couldn’t help but wish the park rangers would impose a fine to anyone not using their indoor voice.

On another note, what is it with people hiking in heels, mini skirts, slacks and suits? Do these people wake up and think “I’m hiking a mountain today. I think I’ll go with the little black dress!”

Okay, so it’s not Mount Everest; however, if I’m actively working up a sweat I personally stick to workout gear.

Overall, the hike took me about 90 minutes-to-two hours round trip.

I would rate it as moderate, as there are are a lot of uphill sections but nothing overly steep as long as you’re in decent physical condition.

The History Of Bear Mountain

Overall, though, I had a great hike — especially when the Perkins Memorial Tower at the top awarded me a dose of heritage.

Inside, there’s a small three-floor museum and lookout with old photos and historical explanations.

The Perkins Memorial Tower was built in 1934 — paying homage to George W. Perkins, founder and first president of the Palisades Interstate Park Commission — with the park itself being established by Perkins in 1900.

His goal was to give the public a place to enjoy nature as well as have an affordable and nutritious meal, which is why he also founded The Inn.

Today, you’ll find much of Bear Mountain State Park remains in its natural state, although the lakes were created between 1920 and 1940 under the direction of Major W.A. Welch, who was the park’s General Manager during this time.

Interestingly, in 1908 Sing Sing almost created an extension of their prison where today you find a playing field. Mr. Perkins fought hard to keep this from happening.

At the summit it begins to get crowded, although this won’t stop you from enjoying the beautiful views and museum. Photo courtesy of Jessie Festa.

He also fought to save The Palisade’s (the basalt rock formation on the west of the Hudson River) from being over-quarried by companies who wanted the rock to help build NYC.

Moreover, in 1919 orphans from NYC were brought to the area around Bear Mountain and supplied with discounted meals from the Bear Mountain Inn.

Basically, from what I could tell this man was a pretty stand up guy who definitely deserved to have a memorial tower and trail named after him.

I did it! I made it to the Bear Mountain summit! Photo courtesy of Jessie Festa.

From the top of the tower, 360-degree views of Bear Mountain State Park and beyond were visible, with labeled panoramic photos under each window so visitors knew exactly what they were looking at.

Looking up at the Perkins Memorial Tower. Photo courtesy of Jessie Festa.

Although I was a bit tired, I decided I wasn’t done taking in Bear Mountain’s beauty — especially as I would soon have to return home to the trash-filled streets, incessant sirens and rumbling over-ground subways of Bushwick, Brooklyn.

I decided to do the 1.5-mile (2.4-hectare) loop around Hessian Lake, an easy flat, paved and scenic stroll.

While I got some beautiful lake shots and really enjoyed watching the couples and families paddling, I noticed a few unusual things.

First was a woman carrying a baby in her arms…while pushing a stroller full of acorns she had collected. I couldn’t help but wonder if she also had a baby squirrel to feed back at home.

Another was a photoshoot going on between three metrosexual guys, who I guess maybe were models (or at least, thought they were).

The shoot started out normal, a guy leaned up against a tree and had his picture taken. But then things started to progress…quickly.

Next, he was hugging the tree, and then, he kissed the tree. He basically got to third base with the tree — the whole time having his photo snapped — before I began blushing, feeling like I was watching something I shouldn’t be and scurried away.

Steins on the trail on Hessian Lake. Photo courtesy of Jessie Festa.

Lastly was all the hikers carrying giant steins full of beer. What a great idea! I thought to myself.

Why didn’t I think of that?

It took a moment before I realized it was Oktoberfest and Bear Mountain celebrates the holiday each year to the fullest with lots of local brew options, artisan tents and barbecuing.

Oh yea, friend and fellow blogger Leif Harum of Runaway Guide also attests to having seen a nude hiker wearing only a sombrero last time he was at Bear Mountain. I guess that guy didn’t know what to wear going hiking.

Needless to say, it’s not only scenic, there are some great people watching that can (almost) rival NYC’s.

There are lots of benches are Hessian Lake to enjoy the scenery. Photo courtesy of Jessie Festa.